Yanina Zaichanka is a visual artist who uses mixed mediums such as textiles and sculpting techniques in her art. Her creative expression often revolves around themes of conflict, exile and gender.

Yanina Zaichanka is a Belarusian artist currently pursuing her BFA at the Oslo National Academy of the Arts. Prior to moving to Oslo, she had been actively involved in the contemporary art scene in Minsk. In 2018-2019, she took a one-year course in Contemporary Art and Drama at the European College of Liberal Arts in Belarus. Her works have been shown at two solo exhibitions – Freedom (of Speech) from the Unbearable at Pradmova Festival of Intellectual Literature in 2020, and Being a Woman at ECLAB in 2019. She has also contributed to some group shows, including CIAHLITSY exhibition of queer art and Halasy exhibition of art destigmatizing people with mental health conditions. Yanina has recently participated in an art residency R22: Repression – Expression // Violence – Creative Resistance organized by PRAKSIS and PRIO in collaboration with Motaz Habbash.

“I come from quite a creative family: both my parents are architects, and some of my relatives are also creatives. My mother started taking me to an art studio before I turned three. I would draw all the time, or else I would build a new castle every day. I always wanted to be an artist, but when I was a teenager, somebody convinced me that it was impossible for a woman to become an artist because of all the traditional expectations society places on women. In that period, I was jumping back and forth between wanting to become a genetical engineer or a linguist. I ended up studying languages for 5 years, yet always had an art project on the side. I got to participate in a number of queer art workshops, as well as take a course in Contemporary Art and Drama. These experiences broadened my perspectives on what art was. After some time, I realized that it was not enough for me to work on my art projects on the side and decided to pursue art full time. My language learning skills came in handy and having learned Norwegian as a hobby I looked into art academies in Norway. In 2021, I was accepted to a BFA program at the Oslo National Academy of the Arts made the move from Minsk to Oslo.”

I was frozen for a couple of days after Russia attacked Ukraine. Russian invasion of Ukraine made me meditate on how unnatural war was, and I created the ceramic piece ‘The Inhuman Face of War’. The process was rather intuitive, but now that I have some distance to it, I can unpack the meanings I unconsciously put into the work. The many mouths represent the imperialistic hunger for more, while the small eyes indicate the shortsightedness of the dictatorships. 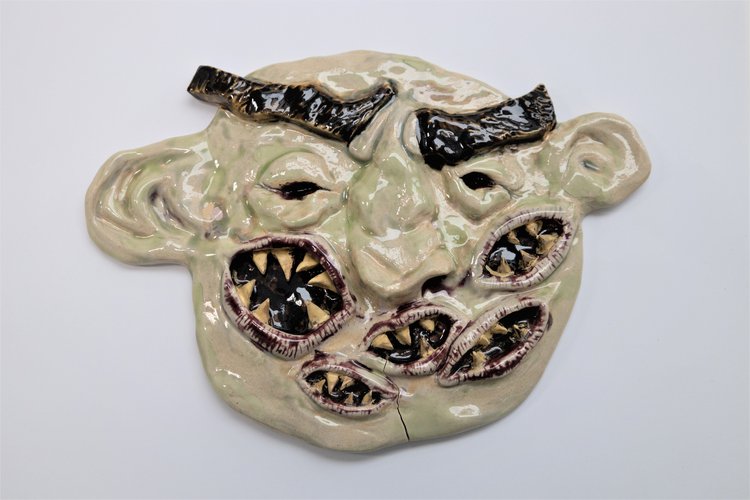 As a Belarusian, the revolution in Belarus and its aftermath has influenced me a lot. Although I have previously worked on protest artworks and the issue of political prisoners, I am still trying to grasp the scale of the political oppression in Belarus. As a result, I created the embroidery work Still Counting. I gather the data from human rights reports and embroider red lines on white fabric. Each line stands for a political prisoner. The colors bear a symbolic meaning: our national flag is white-red-white. The work is ongoing as the imprisonment of people who express their opinion, participate in peaceful assemblies or are involved in political activities continues. 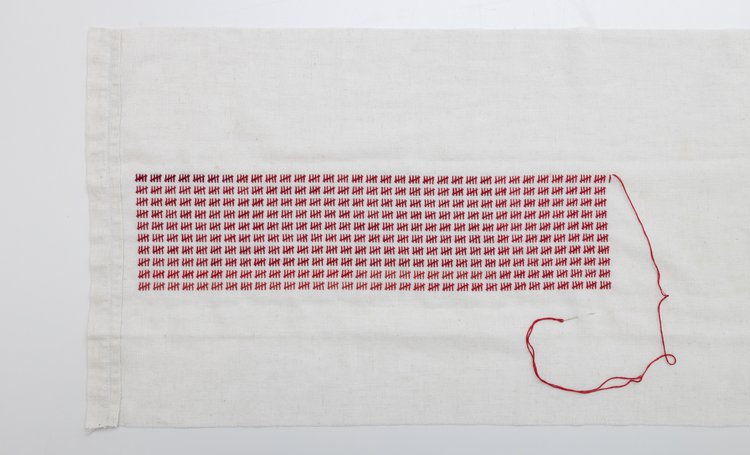 Stil Counting (2021-)
All images/videos used on this page are copyrighted by the artists, unless stated otherwise.
Back to top Back to all artists
Visual Artist