INSPIRE doctoral researcher Trude Stapnes has been part of co-organizing the exhibition Voices from Burma’s Spring Revolution which presents work by 14 artists from Myanmar. Voices from Burma’s Spring Revolution opened on Monday 19 July and will run until Sunday 12 September 2021. If you are in Oslo, you are warmly welcome to visit the exhibition in Torggata, outside Glasmagasinet.

The exhibition is organized by Myanmar Bazar, a small organization set up by Ida Fagervold, Hannah Strøm Werkland, Frida Sofie Slettvold and Trude Stapnes. The organization aims to spread awareness about what is happening in Myanmar through art.

On February 1, 2021, the Myanmar military seized power in a coup.

Peaceful anti-coup protests began few days later with people taking to the streets. The protests grew massive with hundreds of thousands of people demonstrating all across the country. Artists responded with creativity. On the streets, painters created artworks, performance artists and dancers held performances, musicians played concerts, and poets recited poetry. Paintings, illustrations, music and poems spread on social media. Art has become both a tool for and symbol of the massive mobilization against military rule, violence and authoritarianism in Burma.

The response from the military to the mass-mobilization soon got violent. On February 9, 20-year-old Mya Thwet Thwet Khine was shot in the head during a protest in the capital Naypyidaw. She died in the hospital ten days later and was the first person known to be killed in the anti-coup protests. Since then the number of people killed, injured, detained, abducted, raped and displaced has kept growing. As of June 30, 2021, at least 880 people, including children, have been killed by the military or police forces and at least 5200 people have been detained. Violence is escalating. Large parts of Burma are now transforming into war zones.

In this exhibition, Myanmar Bazar presents work by 14 artists responding to the current situation in Myanmar. The artworks were all created after the military coup. They portray the situation currently happening in Burma and demonstrate resistance against it. 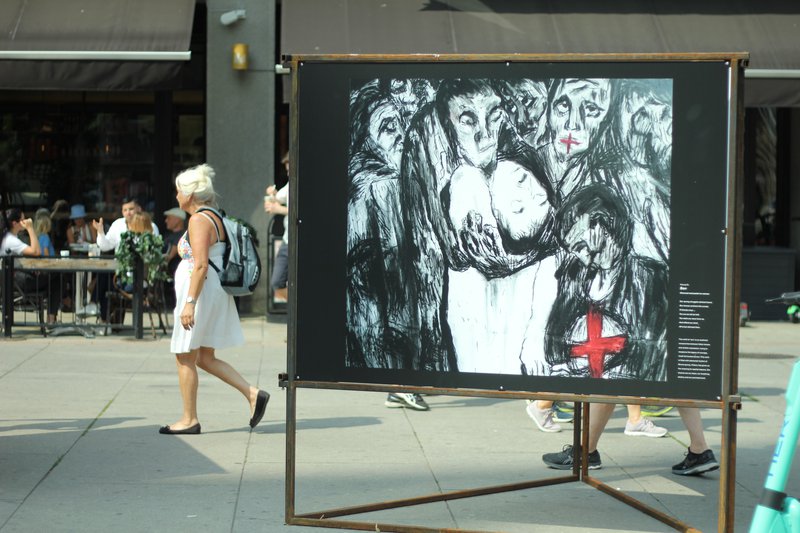