As it is the last day of the month, it is time to highlight another artist from the INSPIRE platform. For the month of August, we spoke with the formidable Diala Brisly: animator, painter, illustrator, conceptual artist, and muralist. In our interview we covered amongst other topics, her creative process, how change is her ultimate inspiration and the value of creating community.

Diala began her art career as a cartoonist at the Syrian-based Spacetoon TV channel in 2001, where she started as a layout artist. Since then, her career has grown to include a variety of media including layout design, animation, concept art, painting, comic books, and character design. Even so, she was interested in art from a young age.

“I was three years old, but I remember the red, it was like lines of red— and she had a comb from wood so I was sharpening it and thought it will become a pencil.”

With these words, Diala recalls her first ever mural, painted with her mother’s makeup around their house. Diala was raised in Damascus, Syria. Then, after the war started, she left Syria and eventually sought asylum in France. During the upheaval from her country, she revived her interest in mural drawings, this time in refugee camps across Lebanon and Turkey. Keeping children in mind, her mural initiative in the refugee camps was focused on encouraging children to return to school. Her murals in these refugee camps is playful and colourful contrasting with their grey surroundings, providing, in that way, a therapeutic visual distraction for the children and adults that reside there and a reminder of the significance of imagination, play and the physical environment for children everywhere. 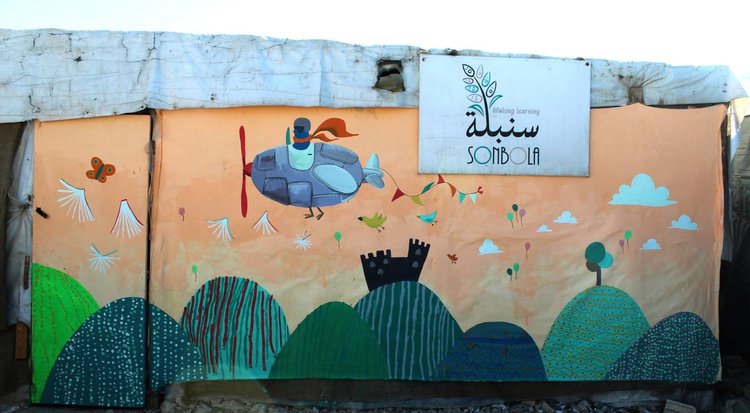 Creative Process & Inspiration
In her teenage years, she did not get the opportunity to study art in school as she did not have the support of her parents in her creative practice. Yet, she carved out her own space of time for creative expression. She describes waking up at 3AM in the morning as a teenager and sprawling on the large kitchen table with all her colours and materials. The table was in a large room, and she describes watching the sunrise through the large windows that surrounded it.

The descriptiveness of her memories is starkly visual. This is something we return to throughout our interview, as it underpins her creative process. She describes, that although inspiration comes through various mediums, such as news, images or abstract thoughts ("just comes to me"), her brain often translates these inputs to something visual. However, she admits with a smile, that even though the visualisation in her head is often clear, it does not always translate on paper, or it is not always ready to be translated onto paper. After all: “You are still discovering”.

Diala recalls an example:
“Me and my sister were sitting in the car waiting for the checkpoint in Syria which took many hours, and we were thinking, if there was a Pied Piper that could take all the soldiers away and leave us alone. So, I imagined them dancing crazy and Piper seducing them to go out. It was so clear in my head then, but I didn’t draw it at the time.”

That was in 2012. Later when she moved to France in 2017 there were more military groups involved in Syria. The image of the Pied Piper seducing the soldiers was still clear in her head and she decided to paint it adding the different military groups. “I’m glad I didn’t paint it then.” she adds at the end of her story. She found that including the different militant groups dancing at a later stage was able to express the growing complexity of the conflict. The resilience of this image exemplifies the strong role that visualisation and memory play in her creative process. 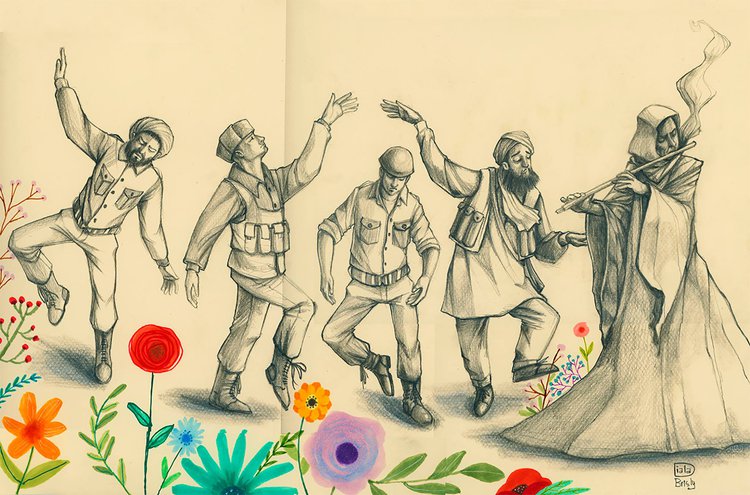 When I ask what inspires her, she remarks: “It’s never the same answer, I discover. Every time I’m inspired by something different! […] I need to always change, I like the idea that every day we can be a different person.” Her story about the view from her apartment in Valence, aptly demonstrates her appreciation of change around her:

“I moved to a new apartment and I am amazed by the view because there is this river— So, in the morning it reflects the other side, it’s very green. During the day it reflects the sky, so it’s either blue or grey. In the end of the day, it’s like around purple, pink and I was like wow, I have a nice view, but it’s not just this— [stable view] it’s alive!

This viewpoint translates into her practice, where she describes letting her mistakes be present in her watercolour paintings rather than fixing them through photoshop or other digital means."When you make a mistake, it makes a turn in your work, you had decided to do it this way, and then it ends up another way"

Themes: Nature & Childhood
Through her work she has explored the themes and topics of social justice, freedom, women's rights, refugees rights, trauma, and education. Diala now resides in Valence, a small city in France. She describes how that has impacted the themes she includes in her work.“This is the first time I live in the countryside, so I am inspired by the nature of Valence.” This has motivated her to include more natural materials in her work, like mixing natural and organic elements that she has collected in hikes and walks. She has many ideas circulating in her head, and one can follow her website to stay updated on her work. 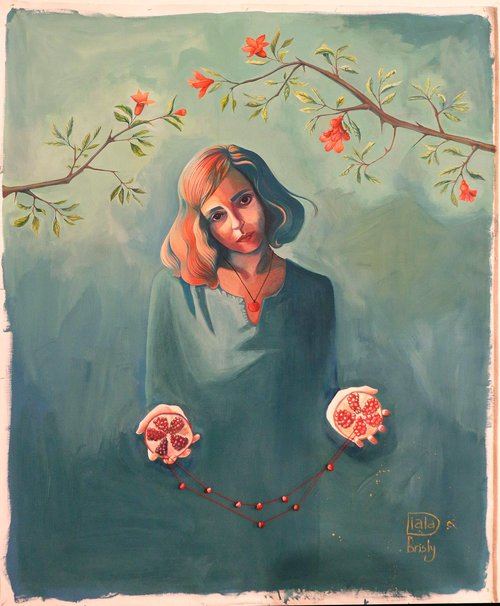 Although she values the fluidity of her sources of inspiration, Diala points out that childhood is a recurring theme in her work.“Mostly, I am concerned about childhood, even when I draw something related to adults. I feel like it’s coming something from the child. […] Childhood is the shortest time of our life, but it creates us.” Childhood opens up for different elements to be explored: joy and sadness, traumas and memories.

For example, she has previously explored the impact of her own memories and the experiences of working with traumatised children through self-portraits, particularly in the series Survival Mode (Pictured). This interest in memories and emotions have also been a long term interest of hers. Since she was younger she was interested in reading psychology, to understand herself primarily. "In schools they teach you everything that you are going to forget later, and they don't teach you anything about yourself." Expressing and unpacking emotions are in that way central themes in her creative expression.

Community
"For me, it's very important to have a supportive artistic community"

Diala describes creating and expanding her own community of female Syrian artists by reaching out to an artist she did not previously know on Instagram, which showcases the role that social media can play for artists in exile to find each other. This led to the creation of a group message with a couple of other female Syrian artists, whom Diala knew from before."I feel happy! This group, it's very new, it's been a year but we really help each other!" She describes how they share many common experiences as and challenges as women and as artists and freelancers. Job opportunities, applications, contracts, office settings, communications: to be an artist is to also be a business person. They discuss these issues along with discussing their art."I have felt how important it is, especially now that we are not in Syria anymore." She also reflects on the differences between how she felt with fellow artists in Syria: “When the environment is not peaceful, I am more competitive. I feel with my now friends, the women Syrian artists I feel more chill, I feel like we give each other feedback.”

On the same note, she describes how back in Syria during her work as an illustrator, she had a more consistent community of other artists who all worked in the same atelier, saw each other often and exchanged ideas. Having this community for support was important for her. Although, she adds, there was competition and jealousy that emerged from it too, especially from male artists. She experienced differences in pay and having to work "twice as hard". Nontheless, she emphasised, that Paris and Europe more broadly also have a way to go regarding female representation and compensation in the art world. 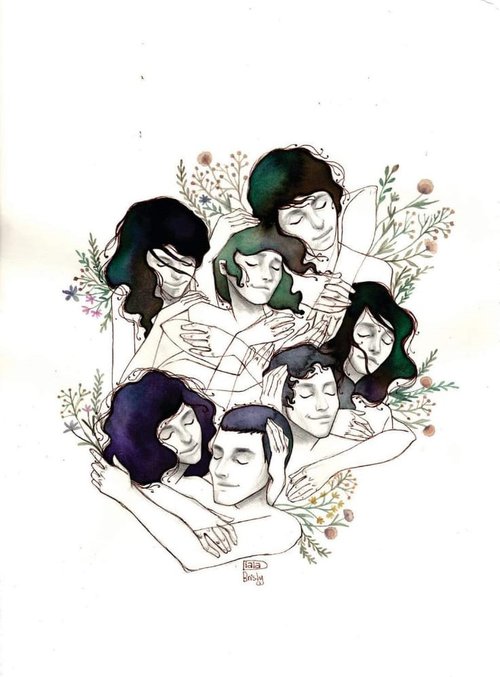 After an art residency in Valence, she discovered the large art community in the area and decided to move there from Paris. Whilst Diala finds inspiration in change, change can also be challenging. She painted 'Intimacy' (pictured) to express feeling lonely, and missing her friends after her move from Paris."I missed being with friends, people I know and know me very well." Nonetheless, she stresses that she thanks herself everyday for leaving Paris for Valence as in Paris she describes feel claustrophobic and exhausted. 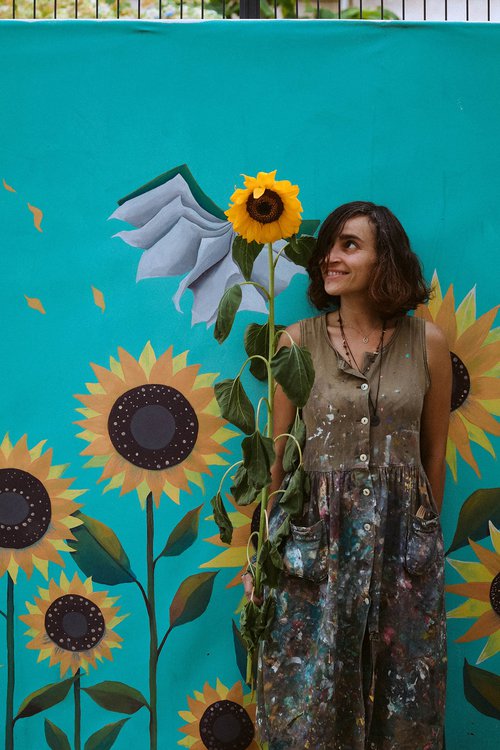 The art scene in Valence is diverse in terms of techniques."Different than what I do" she emphasises, but she still finds it artistically inspiring. One of her favourite things in Valence: La Poudrière a film school organizing a yearly screening where amongst others, animators present their films. Although she is unlikely to move to digital art as she feels a stronger connection when working on paper, she has been looking into developing some installations, perhaps using the natural materials and the sceneries that her life in Valence inspires.

Diala is currently participating in the R22 residency organized by Praksis in collaboration with Motaz Al Habbash and PRIO.

The residency runs from 15th of August to the 9th of September. Read more about the residency here and follow the INSPIRE news page, along with PRIO centre of culture and conflict Facebook page and the inspire_research project Instagram account for more news and upcoming events.