Jad is an architect and visual artist. In his artistic practice, he often uses the public space to invite the audience to think beyond the reality they are familiar with. Sensitive to serendipities, collective memory and politics, his mediums and techniques are constantly evolving yet maintain a connection with their physical environment.

In El Khoury’s practice, ecological sensitivity, politics, architecture, and heritage come together in pursuit of healing. The medium and techniques are constantly metamorphosing in response to the serendipities and contexts he encounters. Always with a sense of urgency and site-specifcity, his projects vary from static visual installations to socially engaged practices.

After his master's degree in architecture at the Lebanese University, he worked with war traces that are found on buildings of Lebanon. “Being from the first post civil-war generation, transforming accidental monuments of bitterness in the city into choreographed installations dancing with the wind, was a necessity”. A poetic method of rebelling against religious sectarianism. “Burj El Hawa” (2018) was the highlight of Jad’s war traces works that he produced before moving to Oslo in 2020 to undertake the Master in Art and Public Space at Oslo National Academy of the Arts (graduated in Spring 2022).

His work has been shown internationally and he has received awards including the Institute of Public Art Award and the Arte Laguna Prize for Urban Art and Land art. Most recently in the autumn 2022, he partook in the R22 residency of INSPIRE in collaboration with Praksis. He is currently starting a residency at Rådhuset i Oslo where he will sit until 2024.

Burj El Murr (The Murr tower), located in the city center of Beirut, is an accidental monument, an unfinished office building, that was used as a sniper base / prison during the Lebanese civil-war (1975-1990) and kept its torture prison functioning during the Syrian army occupation that lasted until 2005. For 10 Days in Spring 2018, I transformed that monument of bitterness into a choreographed installation dancing with the wind. By installing Beirut curtains on the 400 black windows of the Murr tower. “The curtains were made of the same fabric and colors as those seen in crowded inhabited Beirut streets where locals actually live, contrasting the coldness of the upscale glass towers of the Beirut city center which became a ghost town due to its privatization after the war.”

On the final day of work for the project, the curtains were rolled down, the wind started animating the structure, perpetually shimmering colors. “The ‘tower of bitterness’, once a separator standing at the demarcation line, was transformed to the ‘tower of wind’, a dancing tower in the Beirut skyline calling out for the city to start its long-awaited healing process.”

See the inside of the tower and read more in this article written by Jad. 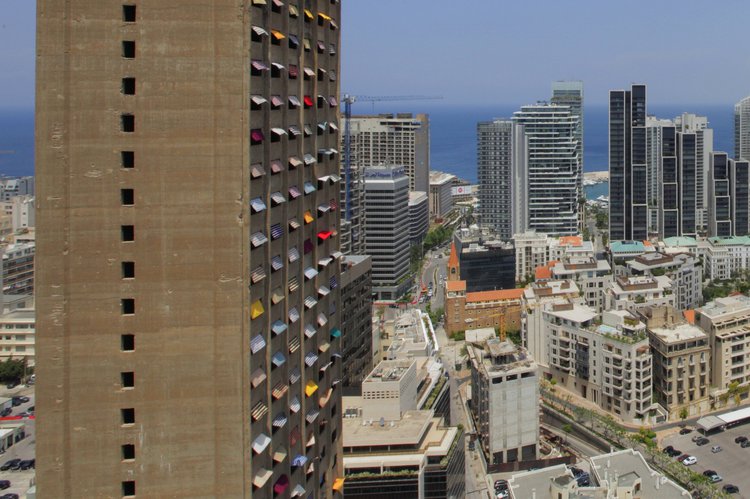 This second selected art piece was created after Jad began his studies in Norway it encompasses well a particular element that Jad is concerned with: serendipity.

"In my first year in Oslo as part of the Master program in Art and public space at Oslo National Academy of the Arts, we (The students) were asked to propose a project for the Nitja art center in Lillestrom.

My research was based on field research and serendipities that happened by walking around, meeting people and things, observing the urban development transforming Lillestrom from town to city. The highlight of all is when I found the WINKING HOUSE. Although it was abandoned and under destruction, it kept being sassy, winking through the same type of curtains, which I have been installing on empty windows of vacant buildings for the past 3 years, in different places around the world. I contacted the company demolishing the house, collected the debris, cleaned it from nails and stored it in nature to heal. Second semester the rescued wood arrived in Khio, where I rebuilt the wink to be exhibited at Nitja. On a personal level the need to rebuild what was destroyed and being in nature to heal, are all part of my own healing process from the traumatic experience of the Beirut explosion which I luckily survived just two days before moving to Oslo in 2020.

On the day of the exam, my classmate Yildiz, invited the patients from a local rehab center, who she has collaborated with for her project. She invited them to see the exhibition, and one of the patients recognized the wink. “This is my house,'' he says. Jarle recognized his house from the curtain pattern. The big opening was that Jarle is the Winking Man, since he has one paralyzed eye caused by the trauma and pain, after his army service with the United Nations in Lebanon. The local newspaper conducted an interview with Jarle, telling about the Urban development effect on him in Lillestrom, as well as his experience after serving with the army." 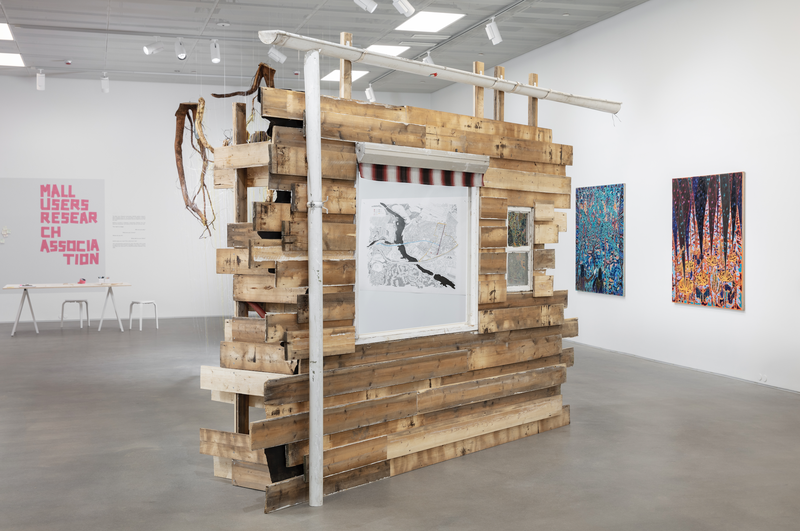 All images/videos used on this page are copyrighted by the artists, unless stated otherwise.
Back to top Back to all artists
Performing Artist