As it is the last day of the month, it is time to highlight another artist from the INSPIRE platform. For the month of September we decided to highlight the incredible Chuu Wai. 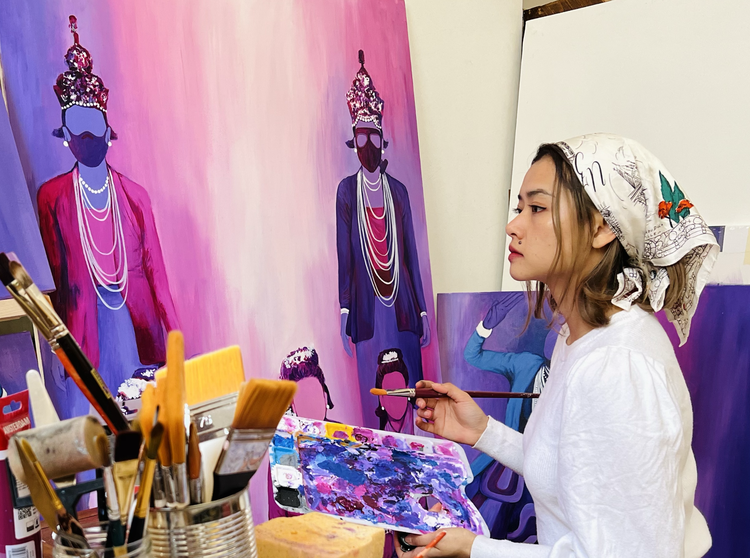 “The most difficult part for me is to think and to travel along, to build the world in my head and then once that is finished, painting is easy” (© Image Chuu Wai)

Chuu is a Burmese artist known for her artworks which highlight the conditions for women in modern Myanmar. Using traditional and handcrafted materials and techniques, she paints strong and confident women which challenges the traditional role Myanmar society has historically attributed to women. The artistic focus of her work and her devotion to the situation of her peers in Burma after the military coup has made her into become a leading figure of the young Burmese art scene. 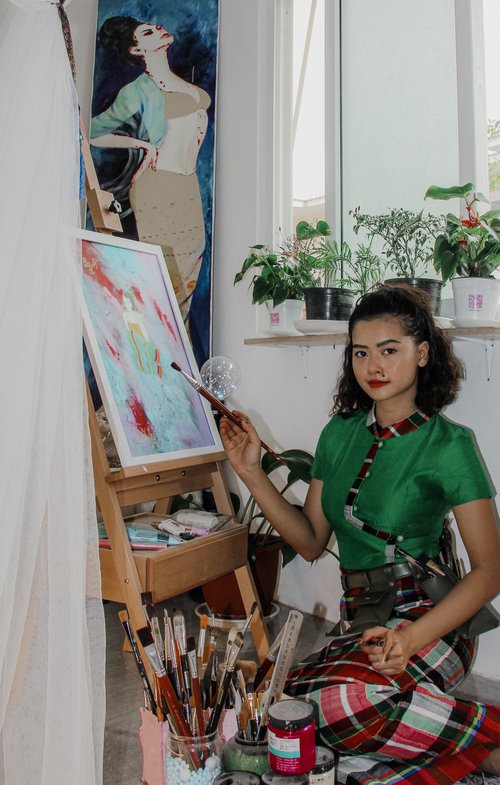 Chuu’s work has been featured in more than 30 national and international exhibitions, such as in London, Hong Kong, and Canberra. She is often invited as a speaker to share insights about the Asian art scene and the status of Burmese women. She participated in the Women Forum of Singapore 2019 and Ted x Yangon Women 2020. In September, Chuu hosted a seminar for the INSPIRE Seminar Series, where she talked about how her personal experiences shaped her art and resistance, her artistic process and the role of inspiration both for the people in Myanmar and from the people of Myanmar. Watch the full recording of the seminar here.

Last, but most certainly not least, most recently Chuu took part in the Open Space organized by PRIO and INSPIRE senior researcher Katarzyna Grbaska co-organized in Geneva, more here. This spotlight highlights her artistic journey, her recent sources of inspiration and her transformative experience at Open Space Geneva.

Artistic journey: From dream to nightmare and dream again

“My dream was to be on the cover, and I still remember these competitions; they helped me a lot to be really interested in painting and colouring”

Since a young age, Chuu has had ambitious dreams that acted as inspiration in her artistic practice. She describes that when she was a child, her dream was to be on the cover of a children's magazine ("Ta-Tine-Mwae") by winning an art competition for kids. In Ta-Tine-Mwae, the first prize meant that the winners artwork would adorn the magazine cover, with a little ID photo of the winners face attached. Reading these children's magazines and cartoons inspired her to develop her art skills and she spent her free time in her childhood drawing and painting.

Her telling of her memories with children's cartoons and magazines underscores how significant they were for sparking her interest in drawing. Yet the same sentiment betrays a sadness for that medium's slow disappearance. "Now we don't have a lot of magazines and books because after the Internet and social media, the market for books is really going down- Especially the comic is almost stopped. We barely see a new comic in Myanmar now, but when I was young, we used to have a lot of comics and especially kids comics. I grew up with these comics!"

Although her main interest was art, she was not allowed to pursue art immediately after finishing school. As she explains, that was largely due to the negative perception of an artist's life quality in Myanmar "you’re gonna be starved, poor, your whole life”. That way instead of going straight to study art Chuu cut a deal with her parents to take up a bachelors in engineering (Information technology), before being allowed to take her degree in art. Nonetheless, she continued taking private art classes on the side, unwilling to put her artist dream to rest.

“When I graduated, I told my mum ‘Here’s the degree’ [in engineering] and I directly went to the Art University and took another degree and since that time I have never looked back”. She went on to establish a ten year old career as an artist in Myanmar.

"I wonder if this nightmare will be over" 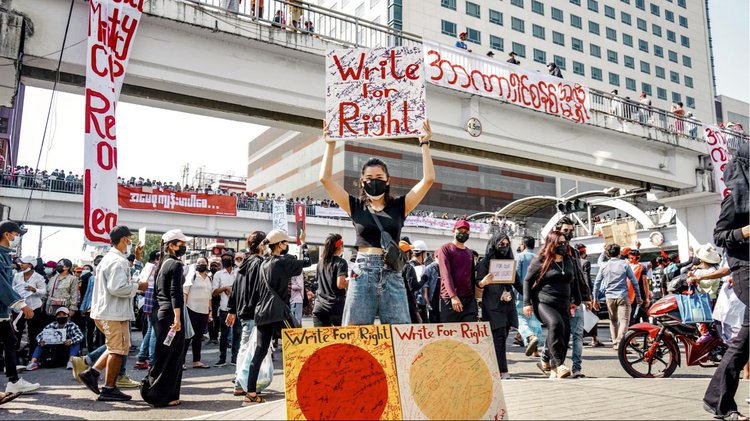 Although she confesses that she never planned to leave Myanmar, after a traumatic incident of the military police knocking on her door and asking questions she decided to flee the country, fearing for her safety. The military had already began violently cracking down on artists making political art or engaging in resistance efforts. Coming to Europe was not easy for Chuu, everything was foreign, new and lonely. Not least, the country she first settled in, to pursue her dream of opening her own studio was Kyiv, Ukraine. She recalls that she found out about the Russian invasion while out of the country, with just a suitcase and not able to go back to get her artworks which had been smuggled out of Myanmar. Recently she was able to retrieve her artworks and bring them to where she has been staying now, in Paris. Nevertheless, fleeing not once but twice in the last two years and having to leave behind her country and the life she built there is a deeply impactful experience, a nightmare as she describes. In many ways Chuu is still processing those traumatic recent experiences, in that way she explains that her experience in participating in the Open Space was transformative.

"Since I arrived in Europe this open space, was really like a door to me, it like opened the door, another chapter.”

Open Space Geneva brought together eight artists from across the arts spectrum with the common element of havingexperienced war or conflict. During these five days the artists held different workshops and presentations with no expectation of any artistic output which was highly appreciated by Chuu: “Open Space was a really amazing, unique event. One of the best parts was that there were no expectations about the outcomes. Often after such events you have to make an exhibition, have to make something, produce something. But the Open Space was really free, you can take any direction you like, it does not have to be the same as the other, individually it is very free. Like the name ‘Open’, it is really open! You can go to the left or right, nothing is wrong” 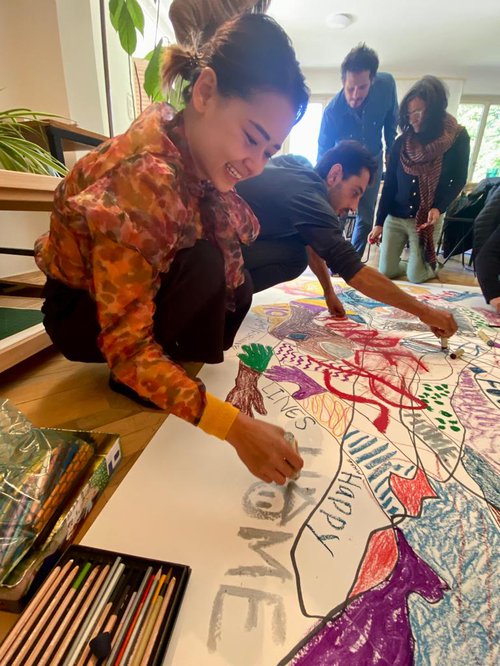 “Compared to the other artists, I am completely new, like the youngest. I arrived in Europe less than two years. I left my country less than two years, what I experienced or the political situation and also the trouble from the bad political situation is very recent, like one year and a half ago, two years ago. Some of them, [Other artists] they already have more than a decade of this experience. So when I look at them I can also see myself and I can also think about myself. See how they go through their life and maybe I will be similar to one of them, so it's really inspiring.”

Early in her art practice, Chuu was inspired by the nature and mythical stories of Myanmar. She describes her love for the mural art of the temples in the historical city of Bagan emphasizing the patterns, the natural paint and the influences from India. However, her experience of sexual harassment on the street altered her thematic focus towards women’s rights and the traditional gender power imbalances in Burmese culture. She started painted powerful women all while using traditional materials such as fabrics and painting methods, contrasting and bridging tradition and modernity. Her artworks painted on the traditional longyi for instance, take the fabric representing tradition gendered roles and combine it with paintings of strong powerful women. During our interview she expressed fondness and appreciation for traditional patterns, materials and techniques and rather than leaving the tradition behind, through her use of such materials along with such representations of women Chuu bridges the traditional to the modern. This topic is something she elaborates more on in her recent seminar which can be found here. 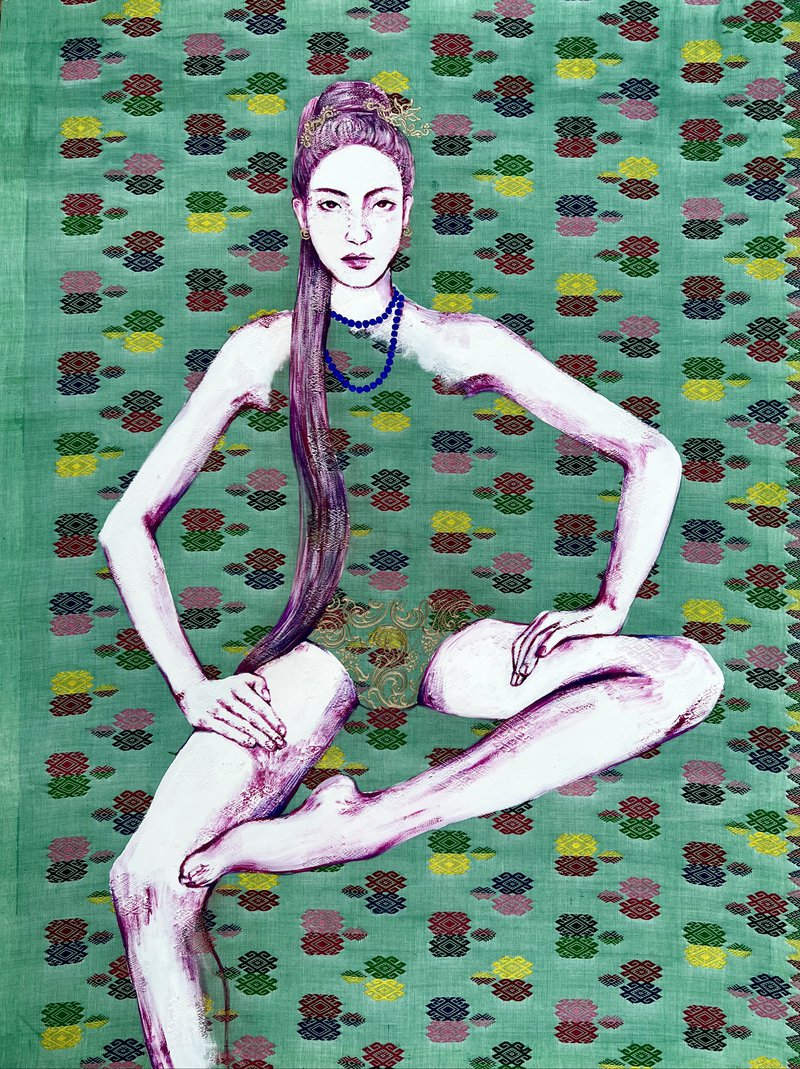 Even during her engineering degree although she struggled to find the immediate connection between her studies and her art practice, she did create a poetry and literature group which she eventually legitimised as a class with the help of a teacher. She describes the importance of establishing a 'proper' class as she describes "the government, they were scared about the university students because in the past a lot of revolutions were started by the university students. Except from class we weren’t allowed to do things like reading literature. They don’t want the students to read historical or political things, to not know about the world and the past”.

In this group, every month they issued a class journal including short stories, poems and drawings. Chuu recalls that she shared information on basic colour technique (pictured above) and she once drew the cover of this journal (pictured below). Notably, achieving her childhood dreams of her art being on the cover of a magazine. 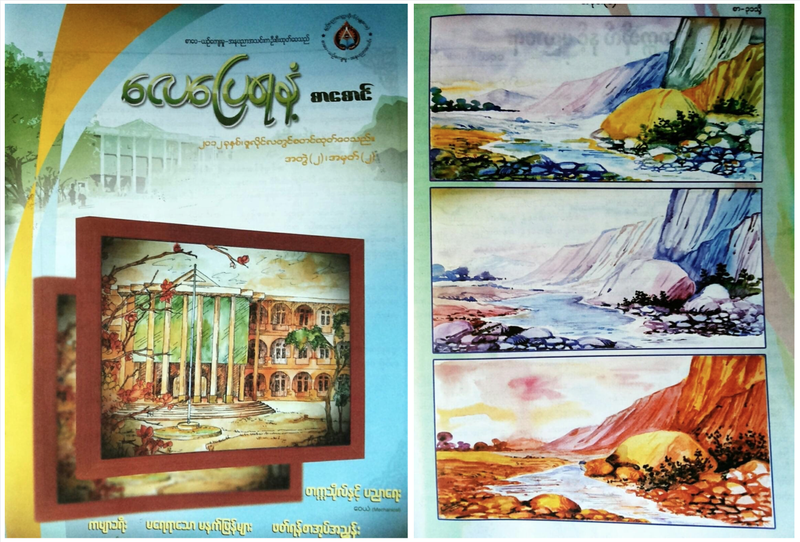 Through this class she organised an art exhibition where teachers from her engineering university attended along with her peers and teachers from her art classes, finding a way in the end, to connect even those two seemingly distant worlds.

Her recurring thematic conceptualisations betray a strong pull to such connections. She expresses that she has been interested in the impacts of colonialism on eastern art and the influences of eastern to western art and vice versa. "I will have to do research on this" she adds with a smile, before adding that she has too many things on her mind and that her sources of inspirations are constantly evolving. At present she describes that relationships between people around her inspire her the most, along with society and daily life. Yet this inclination to bridge the traditional and modern remains present through an idea for an upcoming project of repainting and modernising the traditional Buddhist story series "The Sixteen Dreams of King Pesandi Kosol". Conversations with Marisa Cornejo at the Open Space inspired her interest in revisiting this story. "It's really interesting because of all the weird and bizarre dreams he has like a frog eating a snake or something like and the next day the advisor makes the definition of this dream. It's really interesting, especially when all he is seeing is about society and politics. It's also similar to what is happening in Myanmar with the society."

Not least, dreams, Chuu notes have a prominent role in Burmese culture. She describes "When I was young, every time I woke up after I dreamt about a snake, or removing a teeth, or like something ate me or I was flying or running, I opened this dictionary to find out what it means."

It is common in Myanmar to have a dictionary for dreams: "I want to translate and illustrate it!" she concludes."Sometimes I am sitting at the table, and my brain is just like thinking, my mind is travelling and thinking too deep.” The hard part, she describes, is not the painting itself but building the world and the concept.

Chuu Wai is currently residing in Paris where she is navigating the world of being an artist in Europe.

Read more on Chuu Wai at her INSPIRE profile and on her website and stay updated on her art practices through following her on social media: Facebook and Instagram.

All quotes are by Chuu Wai from an interview conducted on 29 September, unless stated otherwise.